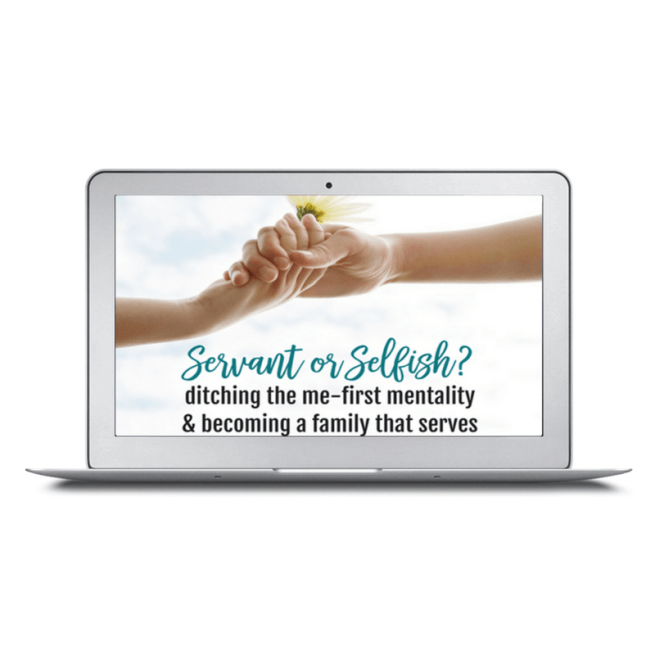 Servant or Selfish? Ditching the Me-First Mentality and Becoming a Family That Serves

This training series offers parents over two hours of training material (in two sessions), including concrete ideas about how to not just teach kids about servant-heartedness but also practice service in the real world. You’ll learn…

• The one trick that gets even the most resistant teens excited and ready to serve!

Everyone knows someone who is a big fan of the  movie Die Hard. In the film, actor Alan Rickman and his cohorts are supposed to be German criminals pulling off a heist (before Bruce Willis swoops in to save the day). But did you know most of the actors who played the criminals didn’t actually know how to speak German? What they speak in the movie is mostly gibberish. The fake-German gibberish is so bad, the terrorists were simply described as coming from “Europe” in the German release of the film.

There are certain things you just can’t fake in life—and true servanthood is one of those things. You can “do service projects,” but true empathy, compassion, and attention to the needs of others come from the heart.

In this series of trainings, you will learn how to help servant-heartedness become your child’s native language. Just like learning a new language, becoming a servant is something that takes time and practice—and intentionality. But when your family learns to serve the world together, it makes all the difference.

There are no reviews yet.

Be the first to review “Servant or Selfish? Ditching the Me-First Mentality and Becoming a Family That Serves” Cancel reply