In case you’ve been in a coma over the last week, let me get you up to speed…

Last weekend, a 4-year-old boy slipped past a fence at the Cincinnati Zoo, crawled through the bushes, and tumbled into the moat surrounding the gorilla exhibit. This led to a 10-minute encounter between the boy and Harambe, a 450-lb. western lowland gorilla.

The zoo’s Dangerous Animal Response Team believed the boy was in a life-threatening situation and killed the gorilla.

There’s been no end to the news coverage on this story—and a lot of Monday morning quarterbacking. I’m not going to focus on all ways the mother of the boy, the zoo’s safety protocols, or the decisions of the emergency responders have been criticized. Most, if not all, of these criticisms are probably unwarranted, though I’m sure this is been a significant learning experience for everyone actually involved in the incident (as opposed to social media trolls who have nothing better to do). 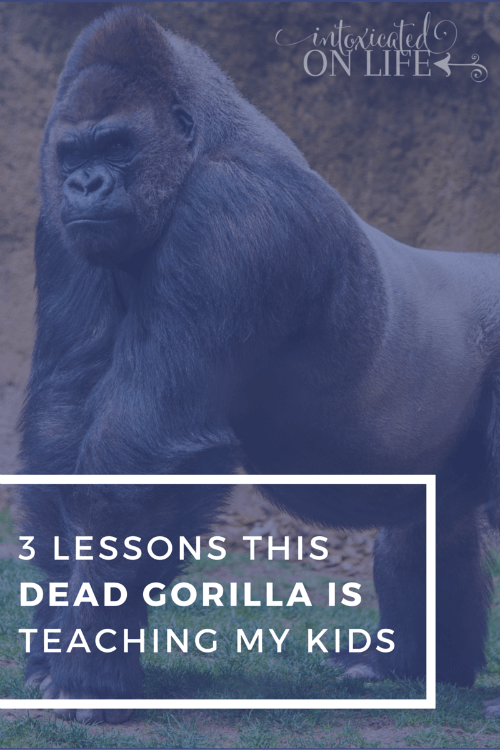 It’s also been a unique learning opportunity for my kids. I sat all my kids down and showed them footage that was captured of the boy with the gorilla, and then we had a very robust discussion. Here’s what my kids came away with…

Eyewitnesses claim the little boy told his mom he wanted to go into the gorilla exhibit, to which she replied that he should not do. Obviously, he did anyway.

Every parent knows how easy it is for a child to wander off. There have been times I’ve turned my back for a few seconds to discover my child has vanished. I think a lot of parents can identify with this. (From all accounts, the boy’s mother, Michelle Gregg, was not negligently ignoring her child when he slipped away.)

Nonetheless, God commands children to honor their elders (Ephesians 6:1-3), and this is for good reason. Kids, when mommy tells you not to go into the gorilla exhibit, listen to the woman.

I told my kids, “There are often really good reasons why adults have the rules they have. Zoos put fences in place to protect you and protect the animals. Also, when mommy or daddy asks you not to do something, it’s usually because they have a good reason, even if they don’t tell you the reason right away. While you won’t be dragged around my a big gorilla every time you disobey, there are often consequences if you do something unwise.”

Harambe was a western lowland gorilla—a critically endangered species—so losing him was a loss for the Cincinnati Zoo and the gorilla gene pool.

There’s maybe around 100,000 of these gorillas in the wild, and every day dozens are killed (except without the social media outrage Harambe got) while their habitat is slowly shrinking due in large part to mining and logging.

Many species of animals and plants have come and gone over the centuries as part of natural rhythms of our world. Still, it is wise for human beings to be aware of how their actions impact the planet. It is, after all, the only planet we have to live on.

God placed the first humans into a garden, filled with diverse kids of plant and animal life, and commanded them to fill the earth and subdue it (Genesis 1:28). Theologians often call this “the cultural mandate”—God expects us to use the natural resources of this world to cultivate them.

I told my kids, “God expects us to be wise stewards of the world’s resources, and that includes animals. There are great benefits to natural diversity because each organism serves different purposes. Each one is a resource that can potentially benefit human research, medicine, agriculture, horticulture, and the general health and beauty of the world.”

I have no reason to doubt the expertise of the zoo’s dangerous animal response team. Seeing the video of that boy get dragged around the water was hard to watch. On Good Morning America, famed zookeeper Jack Hanna said of the gorilla, “I’ve seen him take a green coconut, which you can’t bust open with a sledgehammer and squish it like this,” as he gestured with his hand the ease with which a gorilla can crush fruit. “You’re dealing with either human life or animal life here. So what is the decision? I think it’s very simple to figure that out.”

We live in a world, however, that often elevates animal life to same status of human life. Ethical philosophers say we are guilty of “speciesism” if we dare elevate the value of humans over animals.

The Bible tells a different story. We are created in the image of God (Genesis 1:27), making us unique among creatures on Earth.

Yes, a gorilla died, but this is not nearly as sad as the 1,000+ migrants who died at sea this week trying to flee from Libya to Italy.

If only they had better hashtags—then we might care a little more about it.

I told my kids, “Of course people were sad they had to kill the gorilla, but they made the right choice if that boy was going to be seriously harmed or killed. God says human beings are special, created in his image, unlike any other creature. This means we should be far more outraged when human life is taken than when animals are killed. We should take care of the animal world, but it is not more important than human life.”