During the Christmas season, our family looks for ways to give more of our time and money to those who need it most. We want to teach our children about the importance of giving and serving in light of God’s great gift to us. Last year, we even decided to skip gifts.

This year, we are going to be helping the child victims of human trafficking. 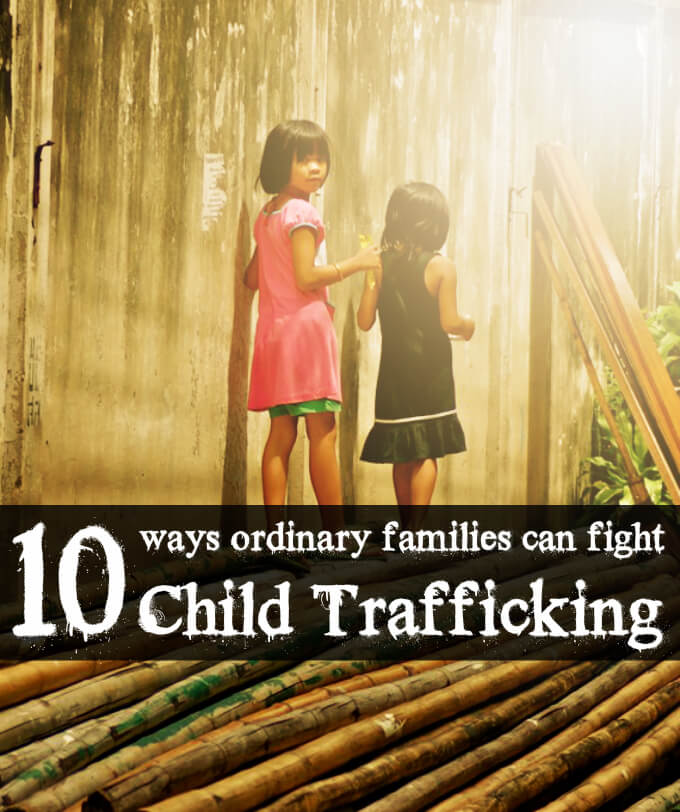 Below are some practical ways you can fight the horrendous crime of child sex trafficking.

1. Educate your community through film.

People love a good movie. While action films like Taken or crime-thrillers like Trade have been popular block-busters, choose films people are not likely to have seen before. Use films like this to begin initiatives in your community.

There are many other films you could use.

2. Refuse to buy anything that sexualizes youth.

We live in an age when young girls are being sexualized more and more through mass media. This only whets the appetite of our culture, helping to reinforce the belief that young girls should be desired for their bodies. Refuse to buy anything that promotes an adultified image of youth.

What is depicted in pornography is not simply sex or sexuality, but commercial sexual exploitation. As Victor Malarek put it in his book The Johns:

The young boys of today are the potential johns of tomorrow. One of the best ways to attack sex trafficking at the root is to help those who are most vulnerable to becoming sex addicts—young men with no fatherly guidance who are heavily influenced by our pornified culture.

5. Pray for the victims, the johns, and the pimps.

When we feel we can do nothing about a problem so enormous, this is a call to prayer. Many organizations have provided informative guides about how to pray: look at Exodus Cry and A Heart for Justice.

6. Find out how your state “grades” and contact local officials.

Shared Hope International has “graded” all 50 states, giving them grades A through F. These grades are based on 6 factors that contribute to sex trafficking.

7. Get your church involved.

Find ways to make your church a hub of education and activism. Use resources like DIVE from International Justice Mission or the pureJUSTICE Bible study from pureHOPE. Find local or national organizations and request a speaker to come to your church. Gather a committee to take action.

Many national and global organizations have local groups you can join (or even start yourself) to combat human trafficking. Look at the Freedom Commons or the 146 Task Force.

Rescued victims need your help. Host a house party to sell jewelry or handbags made by women rescued from sexual slavery. Check out Destiny Rescue, Freeset, Zion Project, or Stop Trafficking in Fashion for more information.

10. Get the kids involved: Raise money for organizations fighting trafficking.

This Christmas season we are having our children raise money for Love 146, an organization that is fighting to end child exploitation and trafficking, in both the U.S. and globally. While we will be discerning in how we talk to our kids about this terrible crime, we believe it is important for them to understand that many children, some as young as 5, through force, fraud, or coercion, are being inducted into a life of awful slavery. We want our children to know that we have a role to play in their freedom.

Buy one of the Ultimate Living eBook Bundles: 25% of each sale of this bundle, purchased through the links on our page, will go to Love 146.

Learn more about the bundle. It is an incredible deal: 86 eBooks,  a 12-week online conference, and other bonuses offers —all for $29.97.