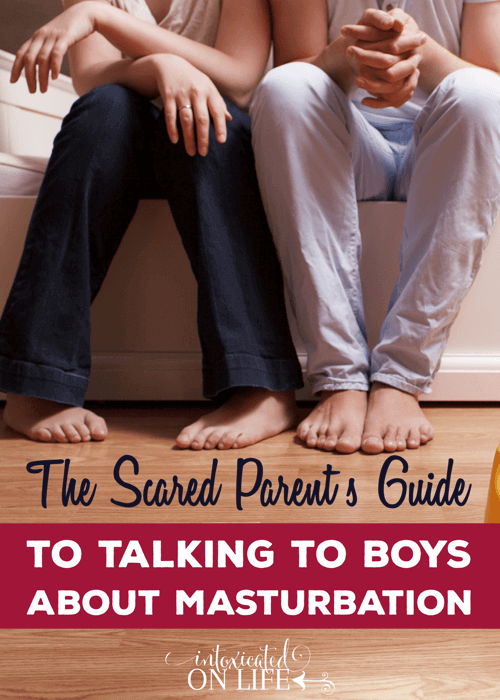 In my last article, I addressed the subject of younger children and masturbation—specifically when no lustful fantasy is involved.

Nervous about having sex talks with your son? Check out our course Having the Talk for more tips and advice about talking to your kids about sex.

In retrospect, most boys feel unprepared for their first ejaculation because they were never instructed about it beforehand. Most boys experience a mix of emotions, often great pleasure mixed with a desire for secrecy, and one study concludes that this is because it is socially taboo and most parents don’t have any intention on talking to their sons about it. 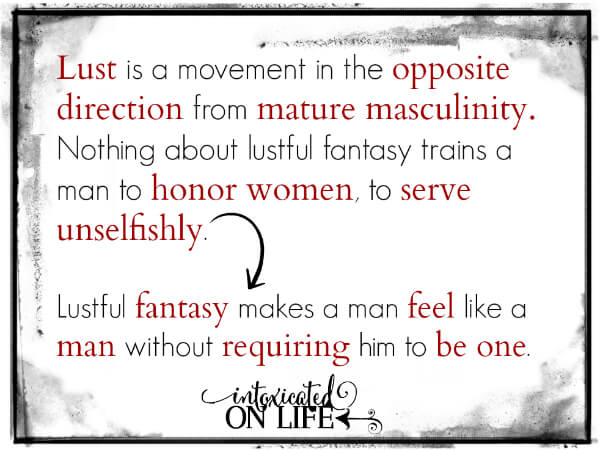 In the Old Testament, the term most often translated “lust” is the same word translated “covet.” In fact, the 10th commandment, which forbids coveting, draws out a possible sexual application: “you shall not covet your neighbor’s wife” (Deuteronomy 5:21).

In the New Testament the Greek word often translated “lust” is epithymeō, and at its root it means a strong craving or longing for something. When it is used to describe sinful longings, it can refer to cravings for evil things, but more often than not it refers to an inordinate desire—even a desire for good things.

Sexual desire is something created by God and therefore good. Lust is when that good desire becomes inordinate: when we begin to crave sex in a covetous way. Joshua Harris’ short definition of lust hits the nail on the head: “Lust is craving sexually what God has forbidden.“

Jesus is clear that lust, like all sin, is hell-worthy. “I say to you that everyone who looks at a woman with lustful intent has already committed adultery with her in his heart” (Matthew 5:28).

Teaching Point #1: Attraction is Not Lusting

The Song of Solomon is full of poetic examples of a married man enjoying the physical beauty and body of his wife. This book is called “the song of songs” (1:1), meaning “the best song of all”—it was Solomon’s greatest poetic achievement, inspired by God to show the place of sexual love in marriage. Young boys need to understand this: their attraction to girls is something God wired into them, something He delights in because it is part of His creation.

At the same time, boys also need to develop an appreciation, not just for the goodness of sex, but the power of sex. Just as sex creates and maintains a powerful bond between a man and woman, sexual attraction is a powerful force. It should never be underestimated—and mixed with our sinful hearts, it can easily be twisted into lust.

Teach this truth to your son: Attraction is not lust, but it can easily become lust. Sex is good. Sexual attraction is good. Lust is evil. The point of distinguishing between sexual attraction and lust is that we do not want our sons harboring false guilt, always mistaking their attraction to girls as a bad thing. The point of distinguishing is not, however, to create an easy way for our boys to rationalize lust as “just attraction.” He needs to know lust is real, his heart is deceitful (Hebrews 3:13), and lust can be very ensnaring. When he experiences physical or emotional attraction, he should learn to embrace this rule of thumb: appreciate a girl’s attractiveness but be watchful of your sinful heart.

Lustful fantasy, at its heart, is like a sexually-charged mental movie. Boys cast their latest crush (or crushes) as the leading lady in the movie of their minds. In that film, the woman plays a certain roll and reads the script she has been given.

These mental movies come in all types—from elaborate romantic comedies to low-budget pornos—but if boys are honest with themselves, the main character of these films is not the woman. The main character is the boy himself. At best, the woman is a supporting actress to the heart of the fantasy. The person who takes center stage is the boy who is fantasizing: he is lead actor, director, writer, and producer. The woman is there to attest to his attractiveness, his irresistibility.

Smith likens lustful fantasy to playing god. “No matter how widely your fantasies may vary, in every instance you play god with people. You reduce those made in the image of the true God to mindless robots who serve your whims.” This is the heart of the problem with sexual fantasies: they train the mind to be self-focused, pleasure-seeking, and escapist, the exact opposite of a life that does all to the glory of God (1 Corinthians 10:31).

Idolatry is at the heart of lust. Paul draws this idea out:

Put to death therefore what is earthly in you: sexual immorality, impurity, passion, evil desire, and covetousness, which is idolatry.

Notice what Paul is doing: he is going from the more overt and outward sexual sins and moving to the sins of the heart. He starts with habitual sexual immorality (such as adultery, prostitution, or fornication), moves to evil desire (a strong craving), and then covetousness, which he calls idolatry.

When talking about masturbation, teach this truth to your son: Lust is offensive to God because it is self-idolatry. Do this by identifying with his tendency to lust: chances are, you can relate to the above concept of sexual fantasy. Dissect your own sexual fantasies in front of your son—not with an emphasis on graphic details, but with an emphasis on how your fantasies are self-focused and self-absorbed. Say to your son, “This is one way our sinful hearts are guilty of idolatry. Instead of making God our greatest joy in life, we escape into an imaginary world in our minds where we are the most important thing, and we use images of the opposite sex in our minds to make us feel important or loved or attractive.”

Follow this truth with grace: While it may feel good to get a girl’s attention in your imagination, God’s favor is so much better. “How can you believe, when you receive glory from one another and do not seek the glory that comes from the only God?” (John 5:44). What helps us not escape into the fantasy of lust is resting in the reality of God’s approval. In Christ, we have been chosen, adopted, redeemed, forgiven, and given every spiritual blessing (Ephesians 1:3-10). Don’t escape into fantasy. Escape into the reality of God. 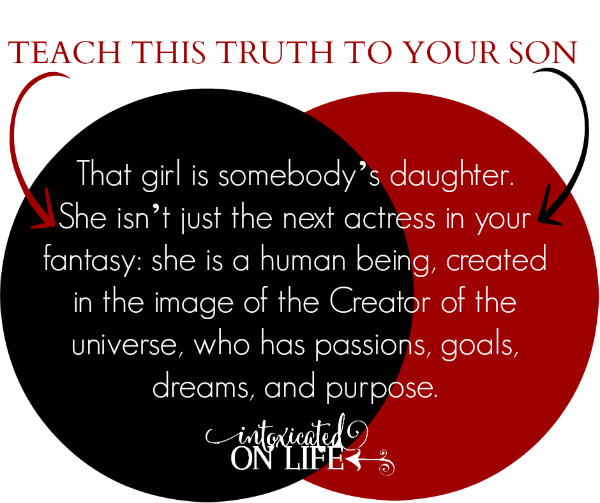 Again, the distinction between attraction and lust is key here. For boys, noticing a girl’s attractiveness is as normal as the day is long. What matters is if they allow that attraction to turn to a strong craving through gazing, fantasizing, and objectifying.

Boys need to learn that woman and girls are creatures created in God’s image, and they should be treated with dignity and respect—even in a boy’s mental life. Lust robs women of that dignity. When they find themselves heading down the mental trail of lust, they need to learn to take their thoughts captive.

Teach this truth to your son: That girl is somebody’s daughter. She isn’t just the next actress in your fantasy: she is a human being, created in the image of the Creator of the universe, who has passions, goals, dreams, and purpose.

I appreciate John Piper’s excellent definition of what biblical manhood is, in his book Recovering Biblical Manhood and Womanhood:

At the heart of mature masculinity is a sense of benevolent responsibility to lead, provide for, and protect women in ways appropriate to a man’s differing relationships.

This is what we want for our boys as they grow into mature men:

Contrary to what our culture might say about manliness, lust is a movement in the opposite direction from mature masculinity. Nothing about lustful fantasy trains a man to honor women, to serve unselfishly. Lustful fantasy makes a man feel like a man without requiring him to be one.

So flee youthful passions and pursue righteousness, faith, love, and peace, along with those who call on the Lord from a pure heart.

This single verse should be the mantra of every growing boy. It is short, easy to memorize, and packs in 3 critical strategies boys need to learn and practice: run from, run to, and run with.

Our boys have “youthful passions.” The first course of action this verse prescribes is: flee.

It isn’t enough to run from lust. If all our boys have to choose between are lust and nothing, this is a sad choice. The human heart was never meant to merely be void of desire. You don’t kill sin by pushing it down. You kill sin by replacing it with holy desires. This verse tells us what boys need to do: pursue.

Boys also need to begin to develop strong relationships with others who can help them as they battle lust. These should should be those who “call on the Lord” (i.e. fellow Christians, as in Romans 10:13) from a “pure” (genuine) heart.

In the end, they become merely the medium through which he increasingly adores himself… 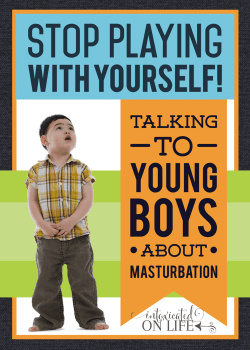