Freelance writer Tricia Marrapodi once said that being a twin is like being born with a best friend. And it’s true. I get a front row seat to that reality every day as I play both teacher and parent to my twin boys.

But just as sure as my twins are best friends, they also know how to get on each other’s nerves better than anyone else. This makes homeschooling a real challenge, at times. The success of our homeschool day is often determined by how well I’m able to steer their energies away from competing with each other and towards helping them work together to learn something new. 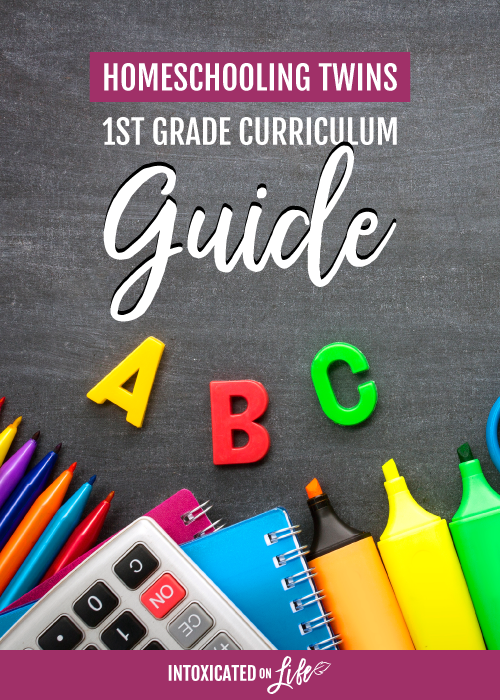 This past school year was the second year in a row I took the lead on educating our twin boys (who were 7-years-old most of the school year). Things went a little smoother this year, I’m happy to say—thanks, I think, in part to me having more reasonable expectations.

Below I’ll outline the order of learning that seemed to work best to make for a smooth homeschooling day.

Our days typically began using All About Spelling. We’ve used this curriculum with one of the twins’ older brothers and it worked really well for him—but he was a little older when he started using it. We were wondering how well it would use for two boys who don’t read nearly as well.

This year they completed Level 1 and I found it very easy to use. The fully scripted lessons plans means I really didn’t need to prepare anything—I just needed to glance through the material 5 minutes before we got started.

I loved that the curriculum really emphasized…

I like that the curriculum focuses on mastery of the ideas, not just doing a lesson a day. We finished the curriculum with a couple months to spare in the school year, so rather than just move on to Level 2, I took time first thing each day (or many days, anyway) asking them to write out phrases listed at the end of past lessons, taking the time to review the spelling concepts when I saw problem areas.

For reading we used All About Reading  for the second year (made by the same folks who make the All About Spelling curriculum I mentioned). 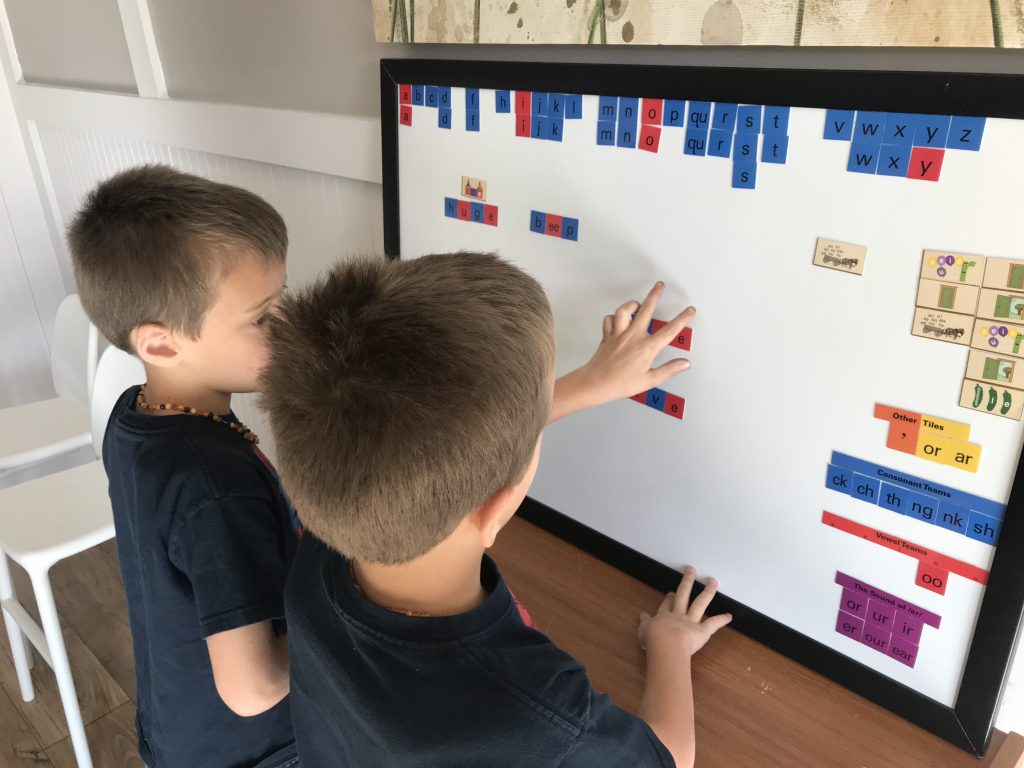 This followed their spelling lesson naturally because we use the same magnet letter board for both subjects.

I would teach the new lesson (or part of a lesson) using the magnet tiles and/or activity sheets that are part of the program. The hands-on letter tiles made it easy for my kids to see the relationships between similar words. (For instance, when I swap out the t in toy with a b, I make the word boy. It didn’t take long for my kids to begin to piece together other words they had heard before—all on their own.) The activity sheets made the lessons fun—and a great way for them to work together.

I usually waited to have them read aloud to me from the readers until a little later (see below).

After spelling and reading lessons we headed over to the couch where I sat with them or in front of them to drill them in things they were memorizing. For most of the school year that included…

Memory time usually took us about 5 to 10 minutes, depending on their mood.

From there we transitioned to reading from books.

I would typically read aloud to them from The Brother’s Grimm. (By the way, can I just say how weird some of those stories are? I get that they are classic fairy tales, but they border on the macabre and bizarre at times.) While I read to them, I also would pause throughout to see if they were tracking with the story and could understand what was going on.

After this, I would have the boys read aloud to me. Often we used one of the readers that’s part of their All About Reading program—I would typically have them read these stories to me multiple days in a row so they got more practice. Other times we read books from the library or other short readers we have at home already.

We started the school year having them read together when they read aloud—one reads a page or paragraph, the other reads the next page or paragraph. That worked well for most of the year. Later on I decided I wanted to have them read aloud to be separately which worked a lot better for maintaining their focus on the story. 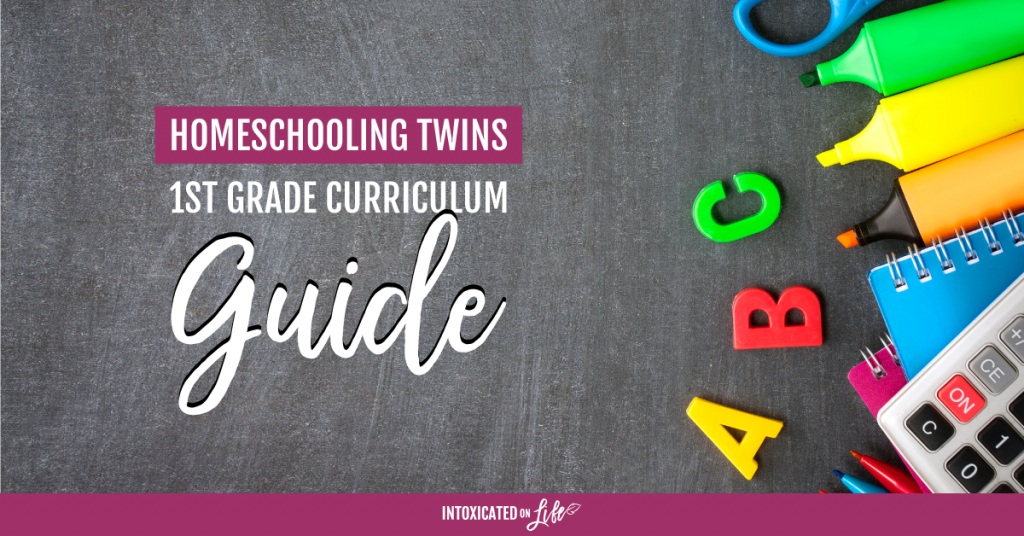 Next we moved back to the table and opened the laptop so they could do their history program: Old Testament & Ancient Egypt from Veritas Press.

Our two oldest kids have gone through all of these online history programs (there are 5 total), and they have not disappointed. Let me say at the outset, if you preview these, I know they look corny—they are corny. But the kids love them. Sprinkled with a lot of games and just the right amount of humor, it really keeps their interest. Best yet, it also gives them a mastery of a particular time period. It’s so cool that my twins can now rattle off 32 historical events in chronological order.

I also love that there’s a Christian worldview that undergirds the entire program.

We started the year doing this together, but we ended up separating them towards the end: one would do the lesson first while the other one worked on something else (like math). This avoided the inevitable personal squabbles. (“He hit the button. I wanted to hit the button!” “I didn’t hear because he was humming.” “Move over!” You get the picture.)

This year we switched gears on math. Last year we used CLE (Christian Light Education) math, but this year we moved to Teaching Textbooks. We still really like CLE (one of our other kids still uses it), but it’s pretty hands on for kids who are not strong readers like our twins, and something needed to give since so much of their work was hands on. Teaching Textbooks is perfect because it reads everything aloud to them and teaches the lesson for me.

They tested in at the lowest level: Math 3. They each had their own online account that kept track of all their lessons and grades—very easy to use. After a week or two, they were doing this largely independently. I usually stayed close by in case they needed help thinking through tough problems, but my involvement was pretty minimal especially after the first few weeks.

Part way through the year, after the concept of multiplication was introduced, we decided to have them start Times Tales. We love these little stories because they really helped our boys memorize their upper times tables. (You might be skeptical when you check this out, but trust me—it works. It uses the power of visual memory in a pretty unique way. We’ve used it with all of our boys.) We started by watching the online videos and then a few weeks later switched to using the flashcards during our Memory Time (see above).

In addition we also enrolled them in Xtra math, which is a free online program that basically takes the place of math flashcards. This year they did the addition facts program. It takes them less than 10 minutes a day, drilling them on their math facts. 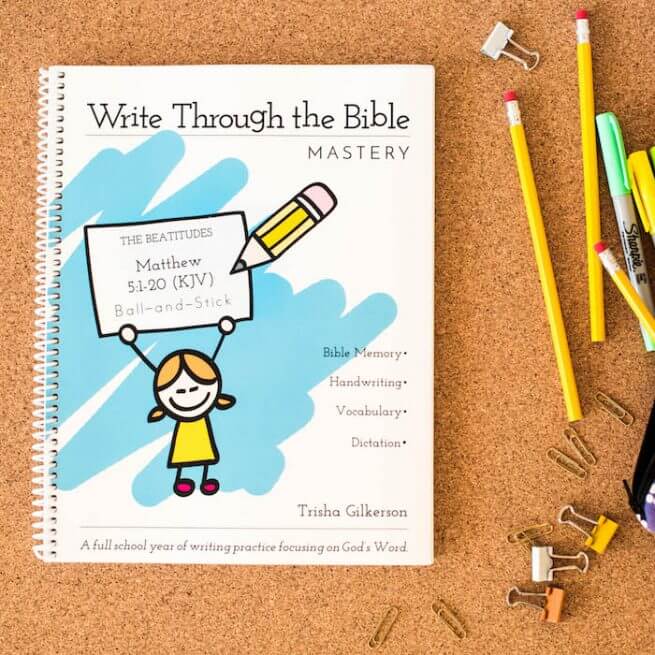 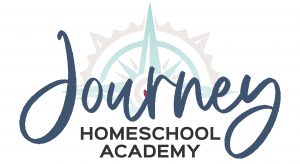 We now have our own homeschool science curriculum available through Journey Homeschool Academy! If you’re looking for science courses that will keep your students engaged and excited to learn about science, check out our offerings including Elementary Astronomy and Elementary Biology. 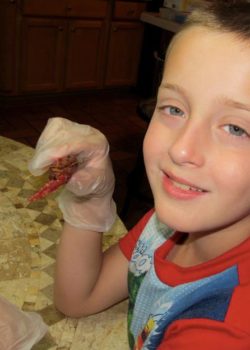