When I learned I had Lyme disease, I went through a strange jumbled up mess of emotions. The doctor’s office called and told me my test came back positive. They wanted me to come in as soon as possible to talk about beginning Lyme treatment. I was near tears.

The tears welling up in my eyes were tears of happiness. I was happy to finally know what the cause of all of my strange seemingly unrelated symptoms were.

I was frustrated—frustrated that I had spent over a year diligently looking for what was wrong. Over a year of visiting doctor after doctor. Much time and money went into doctors visits and a 6 month contract with a health coach (that ended up being a waste of money).

But in the end I was just relieved. Relieved I could finally begin my journey back to wellness. 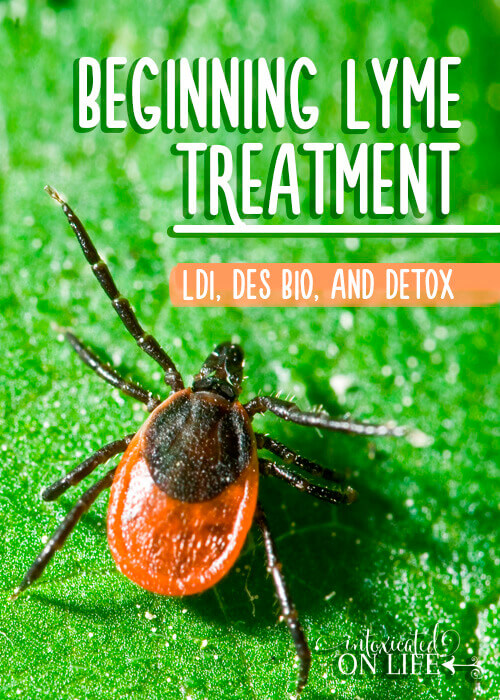 Now that I knew what was wrong, I needed to figure out how to attack this thing.

Immediately, I began to read up on Lyme treatments. I met with two doctors: the doctor who diagnosed me along with another Lyme Literate Medical Doctor to get a couple different perspectives. I devoured articles from those who had been treating their Lyme. I watched youtube videos. I lurked in Lyme disease facebook groups. I chatted on the phone with several other Lymies. I consumed as much information about people who had been successful treating their Lyme as possible.

I was overwhelmed and discouraged. I wanted to feel a decisive sense of direction. I wanted the treatment that universally work for everyone. There isn’t one. Some treatments worked for some and seemed to make no difference for others.

There is one thing for certain with treating lyme disease: nobody knows for certain what the best way to treat it is.

I was chatting with a dear friend from college who has been battling Lyme disease. She wisely encouraged me, “Literally, start somewhere. It doesn’t matter where. Switch if you’re not happy.”

That was it. That was what I needed to hear about beginning Lyme treatment. Just start somewhere. And that is what I did.

The Beginning of Lyme Treatment

I’m lucky to have found not only a Lyme Literate Medical Doctor within driving distance, but also one that is integrative. This means, she integrates the best of what modern medicine has to offer with the best that alternative medicine has to offer. Read more about how to find a good Lyme doctor.

While she gave me many options for treatment including antibiotics and a few popular herbs, I decided to go another route.

Like many Lyme protocols, mine is multi-faceted. It seems that individuals that have the best success in treating Lyme use methods that attack the Lyme and support the body on multiple fronts. I decided to try a homeopathic protocol called Des Bio (only available through healthcare providers).

I couldn’t find a lot of information online about this particular treatment. But, when I asked my doctor how her patients using it have responded, she stated that everyone has seen some measure of success with it. While that doesn’t mean everyone has gotten completely better, that report seemed positive enough for me to try it.

I’m using the Des Bio Complete detox and cleanse along with their Borrelia/Babesia series therapy.

My doctor recommends using the detox and cleanse in order to minimize the herxing (i.e. negative side effects you get from treating Lyme disease). She feels it’s been a very gentle, yet effective way to treat lyme disease in her patients.

I decided to also try a new, innovative treatment called Low Dose Immunotherapy (LDI). The initial reports on this therapy are nothing short of miraculous. The doctor, Ty Vincent, who developed this therapy claims to have approximately 90% success rate in treating Lyme disease.

The theory behind this protocol is that when Lyme enters the chronic stage it’s turned into an auto-immune disease. The reason why you exhibit so many symptoms, is because your immune system is over-stimulated from the Lyme and other environmental toxins. Your body begins attacking itself.

With LDI, the correct dosage for each person is unique, so doctors have to use an educated guess to decide where to start you.

I received my first LDI shot in Mid-April. Yowsers! It stung like a bee. I wasn’t sure exactly what to expect. The day of the shot I felt pretty lethargic and I had a headache. Nothing new. Pretty much the same. By the next day, I was having a good day. By the third day, I was feeling crazy good. I was reorganizing and cleaning out cabinets in my kitchen and closets throughout my house. Trust me, this isn’t normal.

These amazing surges in energy and general feelings of well-being lasted about 3 days. After that, it seemed to gradually taper off over the course of the next few days. I was bummed to see it go, but thankful to have a few days where I felt human. 🙂

I’m anxiously awaiting my next shot. It will be interesting to see how my body responds.

My husband calls this my “Wolfman Medicine” but I affectionatly refer to it as my “Crazy Medicine.” In all seriousness, it doesn’t make me turn psycho, but I sure don’t enjoy taking it.

I’m taking Coartem to treat one of my co-infections, Babesia. Lyme has friends (other bacteria and parasites) that also travel along with it, that are more formally called co-infections. Babesia is a malaria-like parasite that I’m lucky enough to have acquired along with lyme.

Babesia wrecks much havoc in the body. I’m almost convinced it’s worst than Lyme. The racing heart that comes on for no apparent reason—that’s probably Babesia. The mammoth headaches that make me completely non-functional —babesia. The awful head pressure that makes me feel like I’m swimming 8 feet under water—yup, babesia. That time I ran to the ER because my heart was racing and I was having shooting chest pains—babesia too. Life’s a party with babesia.

My doctor highly encouraged me to use Coartem for treating my babesia along with the Des Bio treatment. She really believes that we need to be more aggressive with it. So, I took a leap and have been using it.

Don’t ask me how I like it though. OK, if you really want to know…I hate taking it. I take it 3 days around full moons and new moons because that’s when the bebesia likes to come out and mate (this is why my husband calls it my Wolfman Medicine).

During the 3 days I take it, I’m toast. Meaning, I have to write those days off in my calendar as 100% non-productive days. This is what it’s like for me (I’ve read of others who have it worse with Coartem):

To date, I’ve done 3 rounds of Coartem. I’m looking forward to chatting with my doctor to see when she recommends we remove this wicked medication from my protocol!

There’s a number of other things I’m doing to treat Lyme and friends. It’s important that I support my body. Along with a gluten-free, sugar-free, low-inflammatory diet there are vitamins and supplements that are necessary. Lyme has taken a lot out of my body, so it’s important to restore what’s lost.

I’ve made a couple of videos to show you all of the supplements I’m currently taking. They’re nothing fancy, but it’s a nice way to document my journey. If you want all of the nitty gritty details, you can watch those.

A few more note-worthy parts of my protocol include: cholestyramine, bi-weekly myers IV bags with glutathione, and Boluke.

Cholestyramine – I began taking cholestyramine prior to beginning my Lyme treatment my C4A levels were ridiculously high (over 20,000). They’re supposed to stay around 2,100 or less. This indicates that the bio-toxin load in my body was pretty over the top. Cholestyramine is a medication that binds to bio-toxins and pulls them out of the body.

IV Treatments – My doctor wanted me doing weekly IV treatments of myers bags with a glutathione push, but I decided to do them bi-weekly. These simply replenish nutrients in my body that I’m deficient in. Since insurance isn’t paying for my Lyme treatments, the bi-weekly IV bags works better in my budget than the weekly IV treatments. 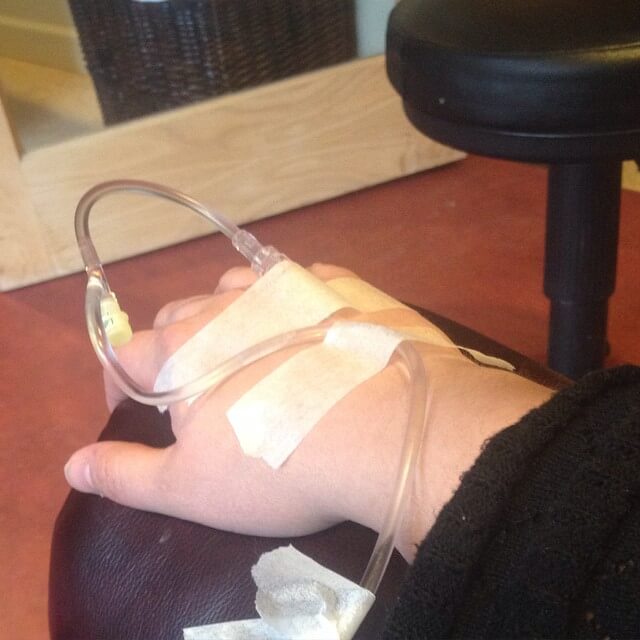 Boluoke – Boluoke is an interesting part of my treatment. I want to specifically mention it, because I think it’s the one thing I’m taking that is causing a real noticeable change. Boluke is a powerful cyst-buster. It breaks up the cysts that Lyme causes in the body.

I have these big knots in my legs. They have been growing and causing increasing pain over the past year and a half. My primary doc ran a number of tests, but couldn’t figure anything out. My Lyme doc told me right away they were created from “Lyme sludge.” The Lyme has built lots of cysts which has gunked up my lymphatic system and is causing, pain, inflammation, and lumps. No fun.

Good news: since I’ve started the Boluoke (approximately 6 weeks ago) I’ve noticed an improvement in my legs. Bad news: the pills cost about $1 each and I have to take 4 per day. Ouch! Ready for the eww factor? The 1 and only ingredient in Boluoke is “earthworm protein extract.” I’m serious. Maybe it would be cheaper to make an earthworm smoothie every day? 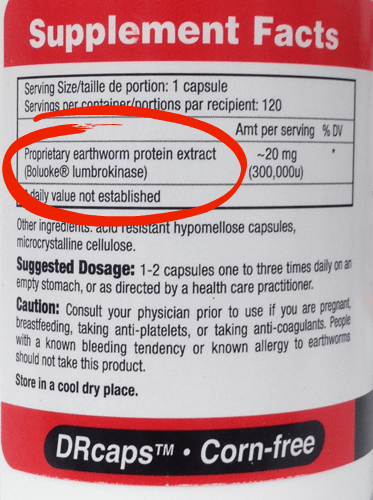 Lyme Treatment: Where Do I Go From Here?

This is what I decided when beginning Lyme treatment. However, I happen to have a doctors appointment coming up in a few days, so I’m anxious to hear her recommendations. I plan to stay the course on several things I’m already doing, but would like to talk to her about tweaking some things for my Lyme treatment.

I’m also interested in adding a few things to my protocol including using an Infrared Sauna and a Rife or Frequency machine (update: here’s my post about Infrared Saunas if you want to learn more about that). Unfortunately, there’s nowhere in town I can go to use either of these. So, logistically speaking (and financially) these are bigger investments.

I’d also like to begin regular lymphatic massage and also try out acupuncture. I’m hoping these will further help break up the cysts and increase lymphatic flow. I’m already doing dry skin brushing and trying to bounce on a rebounder for a few minutes each day to help this out, but I’ve not seen much real benefit thus far.

There’s no one-size-fits-all when it comes to treating lyme. But sharing our experiences can hopefully help as we seek healing for our bodies.

Are you a Lyme patient? What’s working well for you?