When it came to prenatal practices, I used to always follow the doctor’s orders. However, after I did lots of research, I decided that there were 5 prenatal practices that I just did not feel comfortable doing anymore. Here’s why…

Hi, I’m Trisha, and I’m a first-born, ISTJ, rule-follower. I was that obedient child who did what I was told…and did what I was supposed to do even when I wasn’t told. I respect my authorities and do what they tell me.

With my previous babies, I did what the doctors told me to do. Without question. If they made a recommendation or told me to get something done, I was there with bells on. But with this baby (baby #5 for us) there are 5 prenatal practices I’m refusing.

This isn’t easy for me. While I feel confident that I’ve read, researched, and prayed enough to make the right decisions for myself and my baby, telling my doctor “no” still makes me anxious when I think about it. I’m sure every time I say no my heart rate goes through the roof. But it’s more important to me that I’m advocating on behalf of myself and my baby than just go with the status quo this time around. 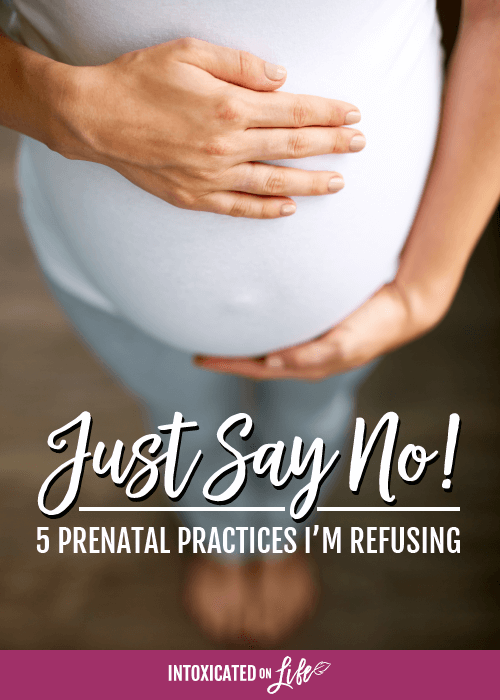 Before we get started, I want to let you know that this is not medical advice—I don’t even know you or your health situation so I can’t advise you. I’m not trying to recommend that you make the same choices I am. But you should know your prenatal practices options!

I showed up at the doctor’s office for my 14-week appointment. After the obligatory pee-in-a-cup-check-my-weight-and-blood-pressure routine, the nurse asked me to get undressed and put on that ridiculous paper gown. I reminded her I wasn’t due for a pap for another 2 years.

Oh, she knew that. But then let me know it was just for a standard pelvic exam.

A standard pelvic exam at 14 weeks? I’d never had one of those with my prior babies. “For what?” I asked confused. I’d already had an intrauterine ultrasound and they knew my cervix was closed (something I don’t decline because of my history of preterm labor), so what could the purpose of poking around in there be.

She responded, “It’s just standard. They added it a while back.”

Well, it has been 6 years since I had my last babies, so some things certainly have changed.

I must have looked at her like she had an extra set of eyeballs because she tentatively added, “You can decline it if you want.”

And decline I did. Thankfully, the doctor didn’t say a word to me about it.

Typically doctors begin regular pelvic exams around 36 weeks. (I’ve never actually made it to 36 weeks pregnant, so haven’t had to deal with this question before.) The doctors are hoping they can keep this little munchkin in place for a few more weeks than I typically do, but we’ll see what happens.

So, why no regular pelvic exams as part of the prenatal practices? I mean, aside from just being uncomfortable and an undignified invasion of my body and all, there’s a few reasons.

I’ll likely allow one pelvic exam when I get to the hospital and am in labor, but beyond that, I don’t plan to have any others (unless the doctor has a compelling reason, then I’ll reconsider). There really is no clear benefit to pelvic exams later in pregnancy and all throughout labor.

Yes, a pelvic exam can tell you have far you are dilated, effacement, and station of the baby. But constantly checking doesn’t do much good.

The TDaP vaccine (tetanus, diptheria, and pertussis) didn’t start getting pushed heavily on pregnant mamas in the US until after 2011. That’s when the CDC issued recommendations that pregnant moms begin getting this vaccination during the third trimester. My last babies were born in 2011, so it’s my first time having to decline this vaccine.

There’s two primary reasons I’ll be declining the TDaP vaccine as part of the prenatal practices. First (and most importantly) is because there haven’t been any long or short-term safety tests on mom or baby when giving this vaccine during pregnancy. In fact, this is what is on the vaccine insert…

Beyond there simply being no actual safety tests on humans, the TDaP vaccine is classified as a Class C drug. The definition of such a drug is:

Animal reproduction studies have shown an adverse effect on the fetus and there are no adequate and well-controlled studies in humans, but potential benefits may warrant use of the drug in pregnant women despite potential risks.

This isn’t a comprehensive post on the TDaP, so I won’t continue to get into all of the health concerns. But for me the potential risks don’t out-weight the potential benefits. 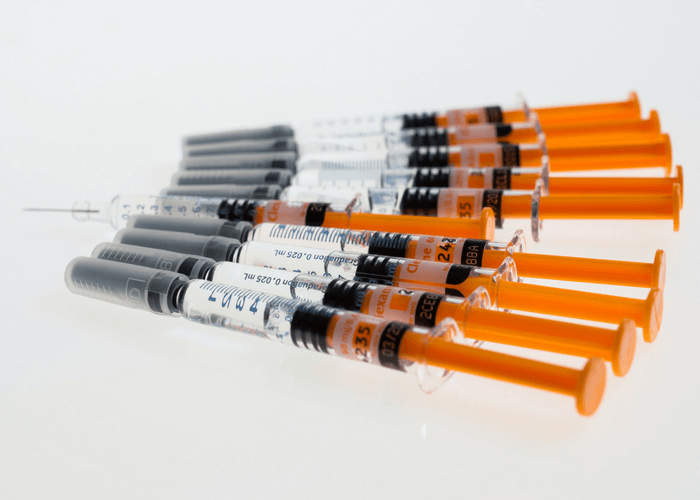 A second reason for me to skip this is because I have 2 MTHFR gene mutations. I know, that probably just looks like a string of gibberish letters, but it’s really a thing.

Those of us that have this particular gene mutation (around 40-60% of the population), it often causes trouble with eliminating toxins from our bodies.

Because of my MTHFR gene mutation and history of lyme disease, my general doctor has recommended that I do not get anymore vaccines—ever. I’m at a higher risk of having an adverse reaction vaccines and also a lyme relapse. No thanks, don’t want to go there.

I’ve never had a flu vaccine in my life, and I’m certainly not about to start now while I’m pregnant as part of my prenatal practices actions.

While this vaccine is being heavily pushed on pregnant mamas, I have all of the same reservations about this vaccine as I do the TDaP vaccine. Beyond that, the influenza vaccine just doesn’t have a great track record. It’s not been proven to be that effective.

If you’re looking to boost your immune system naturally and avoid the flu without a shot during pregnancy (and beyond) there are a number of great strategies you can use, so you can avoid getting sick.

The orange sugar drink. Mmmmm….yeah, not so much. I’ve drank it down and had it come back up more than once in my life. Which meant I had to make another appointment to try again. No more of that monkey business for me.

While it is very important to know if a new mama has gestational diabetes, drinking 50 grams of sugar drink is not the way I’ll opt to find this out. Aside from the high sugar content, the drink that’s typically offered contains brominated vegetable oil, food dyes, and other nasty ingredients I’d rather not put in my body.

Instead of the traditional gestational diabetes screening for part of my prenatal practices, I’ll be telling my doctor I’d like to monitor my blood sugar over the course of a couple of weeks. All it takes are a few little finger pricks throughout the days that I’m testing. It doesn’t involve eating or drinking anything crazy or out of the ordinary.

That’s the beauty of this test. My doctor and I will be able to see what my blood sugar levels are doing in response to the normal foods I eat every day. And it will give a more extensive view of what’s happening in my body—not just a snapshot of what happened during a one hour window in response to something I’d never ordinarily drink anyhow.

There are a number of optional screenings for birth defects that are currently offered, that my doctor strongly recommended to me this time around for part of my prenatal practices because of my *ahem* advanced maternal age.

While we do have the 20- week anomaly ultrasound, the other optional screenings we decline. This ultrasound is much more than just finding out the gender of your little munchkin. It can help detect some serious birth defects that may need to be treated right after birth or sometimes in utero.

We choose not to do some tests because they have a very high rate of false positives. I do understand for some families, it may help them mentally prepare, but for us it would could cause a lot of stress if one were to come back positive. We will deal with the problems if they arise. Other tests, like CVS (chorionic villus sampling) and amniocentesis can increase your risk of miscarriage. 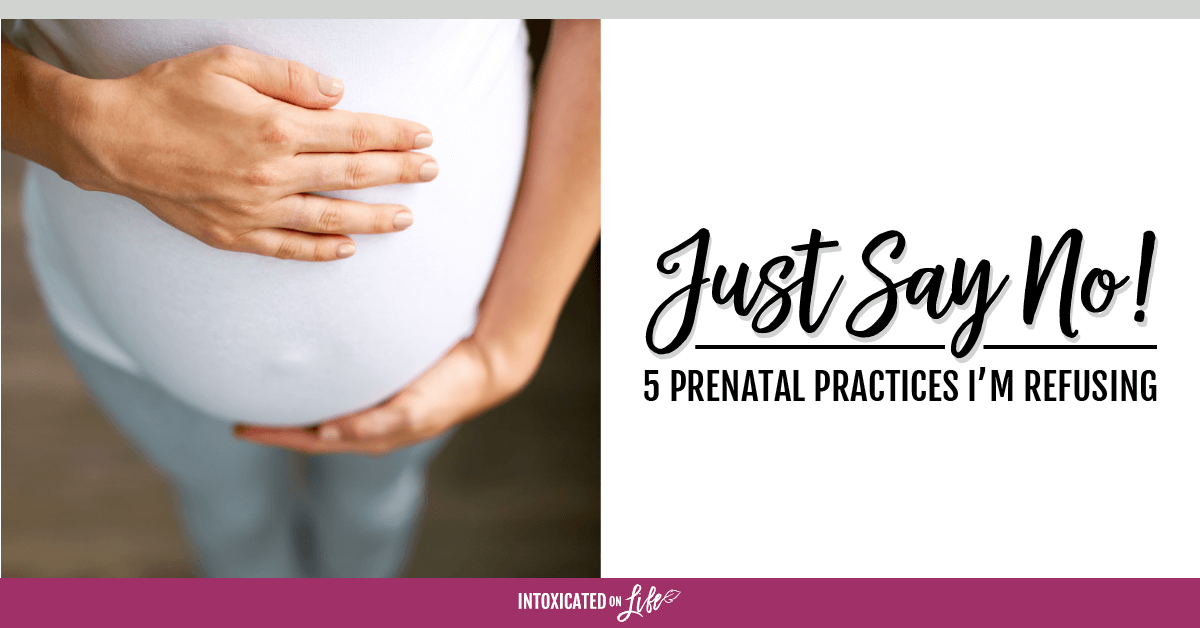 Prenatal Practices and Your Rights…

It’s easy to just say “yes” to whatever your doctor recommends (that’s pretty much what I did for my first two pregnancies) for prenatal practices.

After all, we’ve been programmed to see them as the authority when it comes to our health. While they certainly have lots of information packed into their heads and I certainly want them on my side if anything goes wrong, it’s important to remember they’re not the ultimate authority.

When you spend time researching and understanding both sides of an argument, you’re taking responsibility for your health and the health of your baby.

Some doctors and healthcare providers can try to “bully” you into procedures more than others. Despite what they say, you do have the right to decline treatment and/or tests. Look for a healthcare provider that sees themselves as a member of your healthcare team. You want someone who is going to work towards your health goals—someone who will truly listen to you and respect your decisions.

What about after baby is born? Learn about health decisions I’m making differently for baby before he even leaves the hospital! 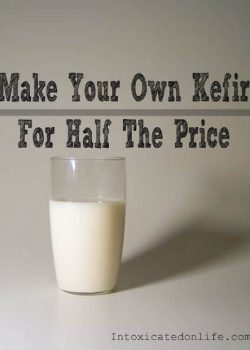 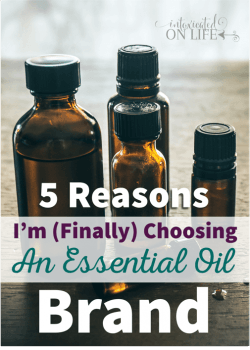